The stamp from the Fabrica Nacional de Moneda y Timbe – Spain’s national coin and stamp manufacturers – celebrates the Royal couple’s ascension to the throne on June 19.

They are going on sale to the public today, as yesterday – the Dia de Hispanidad, and the day the stamps should have been launched – was a Sunday.

The stamps show official photographs of the King and Queen – taken in 2010 – with the words ‘Felipe VI. Rey de Espana’ superimposed in gold.

Both can be bought for a euro each, with 300,000 copies of the first edition – there may be more – available to buy. 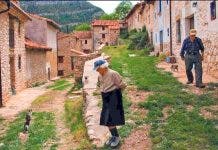