By Imogen Calderwood and Jacqueline Fanchini

EUROPEAN politics are in turmoil. Far-right and anti-EU parties are making impressive gains across the continent as a discontented populace demands new brooms to sweep away self-serving ‘establishment’ parties.

The UK Independence Party (UKIP) sparked a ‘political earthquake’ this month, after taking its first ever seat in the House of Commons, following on from several shock results at this year’s European elections.

But while other European countries offer up ‘protest votes’ to an advancing far-right, in Spain the wind of change is blowing from a different direction, driven by the tempestuous force of Pablo Iglesias Turron and his revolutionary ‘centre-ground’ group, Podemos.

Fundamentally standing on a platform of anti-corruption measures, the party’s main goal is to topple Spain’s dominance of the two main parties the PSOE and the PP.

Established by a group of intellectuals – teachers, professors, scientists and activists rather than career politicians – Podemos is aiming to clean up Spain and try to stop the culture of politicians stealing money from the electorate.

Although only founded in January 2014 – in time to get an incredible five out of 54 Spanish MEPs in the European elections – the party is gathering strength at breathtaking speed.

While polls suggested last month that Podemos could wrestle control off the 35-year Socialist dominance of the Junta de Andalucia, an amazing 24% of voters have just announced they will support the party in next year’s general election.

In the landmark poll for national TV station Telecinco this Sunday, they pipped the PSOE into third place with just 23%.

It is a remarkable rise, many percentage points above UKIP’s, and quite understandable perhaps in a country torn apart by years of appalling corruption by both of the two main parties.

Their strongest weapon is dipping into the general mood of discontent over:

Iglesias, the 36-year-old writer and professor leading this well-timed charge, is not your average politician – and not only because of his ponytail and eyebrow piercing.

“The key to Pablo’s success was that he managed to connect with the hundreds of thousands who participated in the many (protest) movements and who are now frustrated with the rottenness of the existing political system,” explains David Rey, editor of the Marxist magazine, Lucha de Clases.

“He captured their imagination by mercilessly attacking the bankers and the whole system directly, as opposed to normal politicians who are always ambiguous and never say anything clearly,” he continues. “Podemos is the reflection of a deep mistrust in the system.

“While the people are suffering, those who are responsible for the crisis are rewarded with bonuses and the banks get billions of tax dollars. 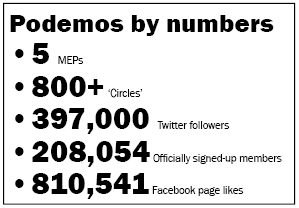 “There have been many lawsuits but no convictions. Many people in Spain feel that bankers and politicians are ‘untouchable’ in the present corrupt political system.”

Who is Pablo Iglesias?

He moved on to a postgraduate programme in Media Philosophy at the European Graduate School, where he studied under world-famous philosopher Slavoj Zizek, gender theorist Judith Butler and American philosopher Michael J. Shapiro.

The Madrid-born academic didn’t just arrive out of nowhere. He has been a pundit in TV debates for years, making him a nationally-known figure, respected across wide swathes of the population.

The son of a lawyer and a history professor, Iglesias – like Angela Merkel in Germany – was a member of the Communist Youth of Spain from 14 to 20.

While he denies being a communist sympathiser today, he doesn’t deny participating in the worldwide anti-globalisation movement in 2001, when he advocated civil disobedience as a form of struggle.

Due to his fearless and passionate rhetoric against Spain’s right-wing parties, Iglesias has been the subject of a bitter smear campaign from the right-wing media, and stands accused of being in league with the communist dictators of South America.

But he is not prepared to take it and in July, he sued Madrid’s PP President, Esperanza Aguirre, after she accused him of supporting Venezuelan President Hugo Chavez, Fidel Castro and ETA. Journalist Eduardo Inda has also claimed that Iglesias received illegal funding from Venezuela. Nothing has been proved.

Nevertheless, he has continued to gain the trust and support of the public.

The story so far

Podemos stunned political analysts at May’s European Parliament elections when, from zero support it won 8% of votes – 1.24 million crosses on ballot papers – in a matter of months.

Iglesias’ reaction was even more surprising. Instead of declaring a huge victory, as most career politicians would have done, he said simply: “Our objectives have not yet been achieved.”

He later added that no victory could be declared until his party was in power.

How does it work?

It is certainly a different party to most, tapping into a democracy reminiscent of the ‘Occupy’ movement that swept across the Western world in 2012.

Rather than branches, Podemos is founded on a system of ‘circles’ and anyone can become a member.

The Podemos political programme has been slowly drawn up by the leadership and sent out to the circles to present amendments.

These are then edited by a committee and posted on the internet, where all its members can vote on them.

There are currently more than 800 circles across Spain, some grouped geographically, others according to profession or philosophy.

Up until recently these circles have been the sole structure of the party, but now they have set up a membership system to create a proper political party. 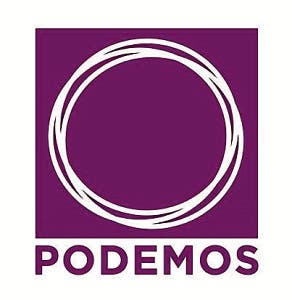 Indeed in late July, Podemos allowed supporters to register as party members on its website, with more than 32,000 people joining in the first 48 hours.

Within 20 days, it had more than 100,000 members, making it officially the third largest party in Spain, behind the PP and the PSOE. Membership currently stands at more than 208,000, and that total is rising daily.

It comes as the party finally started putting together its policies for the 2015 elections.

What do they want?

And one of the most eye-catching moves was to move away from its initial (and much assumed) leftist stand, insisting it was going to instead fight for the ‘centre ground’.

Building on this new, less radical image, Podemos no longer advocates defaulting on Spain’s public and private debt, a change from the party’s European elections policy.

They have enlisted a number of key economists and analysts, including Malaga’s highly-respected professor Juan Torres, who previously helped to formulate policy for the PSOE and the IU parties.

And, as disagreements emerge over how the party should be run, Iglesias acknowledges that even a leader is not immune to the overriding democracy of the party.

While he prefers a single leader and a small team of aides, two of the party’s European deputies – Pablo Echenique and Teresa Rodriguez – favour a ‘citizen council’ with three spokespeople.

Iglesias accepts he is not indispensable and if the party membership votes for the council he would be prepared to step aside as leader.

“I am not an alpha male and not indispensable,” he said, epitomising the spirit of his party. “I will submit to the orders of the majority.”

A year is a long time in politics. Is this is the dawning of a new political age in Spain, or a ‘revolution’ that will fizzle out before achieving its aims?

As the old newspaper saying goes, watch this space…

Consider the provision of electricity, water and heating as a basic right that should be guaranteed by public companies

End of counter-terrorism and public safety policies that violate freedom of expression, the rights of association, demonstration and protest

Return all privatised centres and hospitals to the public sector

Increase in the public health workforce

Guarantee the right to a dignified death

Eliminate any subsidy and assistance to private education, allocating savings to finance and improve public schools

Recognition of a Palestinian state

Demand a full Israeli withdrawal from the occupied territories

Ban bullfighting and trafficking of exotic or endangered species

The other faces of Podemos

PABLO Iglesias may be the poster boy, but there are many others providing the driving force behind the scenes. Podemos won a total of five seats at the European Parliament elections. These are the other elected MEPs elected: 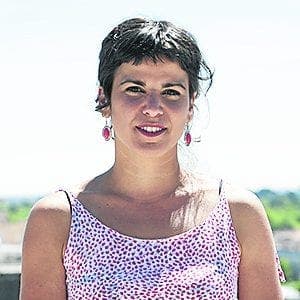 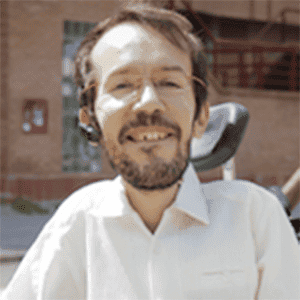 Pablo Echenique Robba – a 35-year-old Argentine-born physicist. Since infancy he has suffered from spinal muscular atrophy. 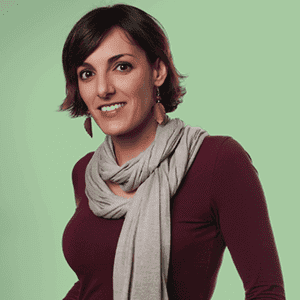 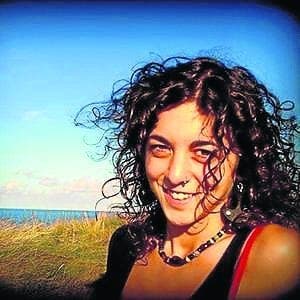