Most expats are familiar with Chris Stewart’s idyllic adventures, published in four best-selling books. So when he invited The Olive Press to his stunning farm El Valero as part of a new walking holiday, Tom Powell couldn’t wait to dust off his hiking boots…

IT’S the oddest sensation arriving at a place in real life that your imagination has already painted for you, from the words in a book.

El Valero, the home of best-selling author Chris Stewart, is intimately familiar to his millions of readers, myself included, and the reality doesn’t disappoint.

The setting for each of his four books, which started with Driving Over Lemons and most recently continued with The Last Days of the Bus Club, we first spotted the rural idyll far down below from an escarpment in the heart of the mountainous Alpujarras region of Granada.

We had been walking for three hours from the sleepy village of Ferreirola, when an excited Canadian in our group spotted the famous farmhouse below.

The valley opened wider with every precipitous step down to the tree-covered retreat, where the original drummer from rock band Genesis was waiting for us with a jug of home-made pomegranate juice and freshly-baked foccacia.

It is rare indeed for a bestselling author to throw his home open to fans; to invite them to walk, talk and laugh with him and sample his home-grown pomegranates – and luckily also plenty of beer and wine!

But Chris Stewart is like few other famous novelists; incredibly open and warm and – thanks to his love of the nearby mountains and walking – has teamed up with the British owner of nearby B&B Casa Ana, Anne Hunt, in Ferreirola to organise some walking tours.

After the success of a pilot tour led by Chris, the pair have officially launched their week-long walking holidays this autumn. I joined the first one for the ride, well, to be exact, walk.

It was 7.30 in the morning when I left the coast at Motril to meet the group in Ferreirola, just as the hazy dawn was beginning to flesh out the dramatic silhouettes of the sierras ahead.

As the rising sun lit up the road, the mountain peaks and the glistening reservoirs, I sensed that this day would be special.

The tiny village takes ‘tranquilo’ to a whole new level and you could hear a pin drop as I roamed the steep cobbled streets in search of Casa Ana.

Only 18 people live permanently in what is quite possibly the most beautiful village in the Alpujarras, including a famous guitar maker and even a handful of expats. Our walking group of 14 people almost doubled their number!

We were a disparate group drawn from all ‘walks of life’, united by a love of the great outdoors, great conversation and the greatest food and wine!

From the Geordie Aussie-based home, to the lawyer and pub-owning couple from Devon, to the Scottish park ranger and his wife, a teacher of autistic children, like the Canterbury Pilgrims there was never a shortage of fascinating stories waiting to be told.

A Canadian couple had planned an entire trip around the walking holiday but, in their excitement at the prospect of meeting their literary hero, left booking until too late.

Luckily for them, Anne and Chris found a way to make room at the inn.

Thus, with the sunshine beginning to warm up the streets, we set off towards El Valero, the self-sufficient farmhouse which first blossomed into our lives when Chris’ first bestseller hit the shelves in 1999: Driving Over Lemons: An Optimist in Andalucia. Our journey took us down the mountainside and across a charming, crumbly Roman bridge spanning the Trevelez river below, the ideal spot to begin snapping photos.

We built up speed as we traversed the Corona mountain by way of an old Moorish mule path, and the noise of our chatter also went up a notch.

“People loved the pilot holiday so much that we had to do it again,” explained Anne, whose pre-Alpujarran life saw her organising festivals, concerts and events in London.

“The area is just fantastic but what makes it special is the mix of people and Chris’ enthusiasm and knowledge.”

Before my arrival, the group had already taken on the Trevelez valley, taken an architecture tour (with obligatory tapas) in Granada and explored the pretty pueblos blancos of the upper Alpujarras.

We were joining for the last two days of the trip, a stunning walk below the ridge of Spain’s highest mountains, including Mulhacen, and this day, the highlight, a gentle-ish walk to Chez Chris.

After just a few hours, the mellow descent through pine trees led us to a wondrous gorge and, in its depths, our lunch destination loomed into view.

Our sense of awe was as profound, Chris assured me, as he and later his wife Ana felt when they first set eyes upon this valley and decided to make it their home. Where it was once sparse and arid, they have created a micro-climate, complete with a charming old green-roofed farmhouse and an extraordinary pool. There are acres of orchards, a kitchen garden where the family grow their vegetables and free-range chickens keep them supplied with fresh eggs and meat.

It is a little gem of a world full of vitality, adventure and legend … the kind of place you could write a book about!

Assisted by their daughter Chloe, Chris and Ana laid out a delicious spread for us on their shady terrace. We tucked into quiches, hummus and fresh herby salad, while swapping stories of Andalucia with our hosts. The wine flowed, loosening tongues, and talk of the Alpujarras turned into a lively debate on Spanish politics.

Slipping away for a moment, I wanted to take a closer look at the fascinating pool which features so heavily in Chris’ writing. The waterwheel was the brain-child of an oddball inventor who convinced the family it would purify water naturally and keep the pool fresh and natural. Encrusted with a thick carpet of leaves and tinged green, it looked a little too ‘natural’ and I resisted the urge to dive in.

Back on the terrace, Chris and Anne had ditched the diplomatic approach and openly admitted that our group was exceptional.

“You’re the booziest, funniest and most enjoyable group yet… cheers!” exclaimed the jovial Chris, raising his glass in a toast.

And after welcoming us into his home and feeding us, Chris seized the opportunity to take full advantage of the merry walkers. We were soon all buying signed copies from his backlog of unsold books, helping him to clear out the store room!

Refuelled with spiced peaches and more wine for the daunting post-lunch walk, it turned out to be a pleasant stroll back along the river, across his famous rustic bridge and straight onto our waiting minibus.

That night, while dining at Casa Ana, we were treated to the mesmerising songs of a Moldovan folk singer called Eliana, who just happened to be volunteering there through a ‘work-away’ scheme. It was our lucky day in more ways than one.

As her sweet voice carried tales of love and pain around the room, it seemed to echo the ancient beauty of the stunning Alpujarras. In that moment, I think we all fell a little in love with the girl from Moldova. 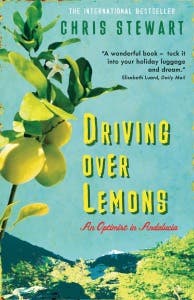 Or was that just me?

April 2015 will see the return of the walking holidays with Chris Stewart, with accommodation at Casa Ana.

The cost includes all meals, wine, transport and guides for the four or five day-long walks and the trip to Granada.

The price is €1,185 per person sharing a room or €1,395 for single accommodation. For more information visit www.casa-ana.com or email info@casa-ana.com

FOR a true taste of the natural abundance on this region’s doorstep, you’ll walk miles to find a tastier meal than the last supper we enjoyed at the Botanic Bar in Capileira.

The menu is a cornucopia of local produce, making it the perfect finale to our Alpujarran adventure.

Delicious sweet potato crisps accompanied by generous mounds of the local jamon Serrano were shared around the table, just to whet our appetites – or ‘para picar’, as they say in Spain.

The meal proper kicked off with a veritable banquet of eclectic starters. Fresh goats cheese coated in sesame seeds, succulent smoked salmon and juicy aubergine were among the highlights.

Next up was highly-prized cheek of pig (carillada), a real melt-in-your-mouth delicacy. Its soft texture contrasting delightfully with the potato and crunchy onion.

Dessert, a gorgeously gooey chocolate brownie with refreshing orange ice cream, seemed a morsel too much but we’d already walked off the calories, giving us the perfect excuse to overdose on pleasure!

Casa in the sky

PERCHED on the edge of Ferreirola, in the high Alpujarras, Casa Ana provides the ideal base for exploring this untamed wilderness.

Anne Hunt has transformed a crumbling old family home into a stylish guest house with spectacular views of the river gorge from its courtyard, blooming with wisteria and roses. 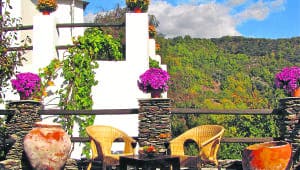 Chef Wes Somerville, formerly of Lemonia, turns fresh Alpujarran produce into exquisite meals, perfect for refuelling after an energetic day in the mountains.

When not hosting a writer’s retreat, cookery course or walking holiday, Casa Ana is available for b&b stays.