SPAIN’S bias towards meat could be a thing of the past, as the country sees a dramatic rise in vegetarian and vegan eateries.

Meat and shellfish traditionally dominate most Spanish dinner tables, with some dishes combining both in an all-out carnivorous celebration.

But according to vegetarian website Happycow.net there has been a 94% increase in healthy eateries since 2011, when only 353 meat-free restaurants were serving.

There are now 686, with many non-vegetarian restaurants providing vegetarian-friendly options.

Spanish supermarkets and markets also offer some of the cheapest and most flavoursome fruit and vegetables in Europe.

While Barcelona and Madrid are slowly building a good veggie reputation, vegetarian options are more sparse in Andalucia, but there is usually at least one health food store per town that caters for vegans.

The rise in vegetarianism is partly due to an increased awareness of animal exploitation and health benefits, while other people love it just for the flavour. 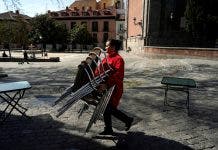 Restaurant owners in Spain’s Malaga estimate a loss of €270 million so far and 80,000 people in the industry without jobs due to the...