MORE than a dozen dromedary camels were found crammed into shipping containers sailing from Lanzarote, their legs and necks tied.

The desperate condition of the animals – being taken to Reyes Magos (Three Kings) parades in Spain – prompted shocked ferry passengers to call the Tenerife branch of SEPRONA.

Two trucks, one containing 13 camels and another carrying two, were intercepted by police. The animals were rescued and the transporters fined.

PACMA, the country’s only political party devoted to fighting for animal rights, followed the incident with a complaint to SEPRONA. Investigations to identify the perpetrators are under way.

Three Kings Day is celebrated nationwide with exchanges of gifts and sweets, and flamboyant parades.

Camels are a prominent feature in the parades as legend tells that Gaspar, one of the three Magi, arrived in Bethlehem on one.

Activists, however, have raised concerns over the plight of live animals used in the parades.

A statement from PACMA read: “It is clear that no political party cares to seek alternatives to the use of animals in shows and celebrations. They are embarrassed to show our children images of abused, terrorised and humiliated animals during the Three Kings parades.”

Domestic abuse calls increase by more than 40% in Spain during the state of alarm, compared to same period last year 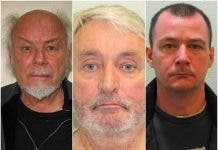