An emergency government meeting was called following the attack in Paris, in which interior minister Jorge Fernandez Diaz said the country’s anti-terrorist security level was being upgraded.

The move will see more police on the streets and tighter security around public places in the upcoming weeks.

However, Diaz stressed that the measures were purely ‘precautionary’.

Although he did predict that the rivalry between leaders of Al-Qaeda and the Islamic State could lead to more attacks.

French police continue to search for two brothers, described as ‘armed and dangerous’. 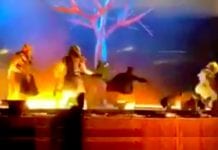 Laurence Dollimore (Digital Editor) - 7 Aug, 2020 @ 11:21
The young people had just arrived back from a Christian camp in Cadiz and were preparing to celebrate a mass ‘with musical instruments’, the owner said