PODEMOS is back on top, according to the latest opinion polls.

The Metroscopia poll of 1,000 people – which was published in El Pais on Sunday – showed that the anti-corruption party would take 28.2% of the vote.

Podemos’ votes have soared, from 25% in December, and from 10.7% of the vote when it was first included in polls in August.

This is less than half the 44.6% backing that the PP received in the last general election in November 2011.

Most people who told Metroscopia they would vote for Podemos said they thought Spain should throw out its two-party set-up.

Many analysts, however, believe there is a PP portion of the vote that does not surface in polls.

Podemos is typically referred to as a left-wing party, although the party insists that such traditional ways of describing politics are no longer valid.

The general election is due by the end of the year, and regional and municipal elections are expected in May. 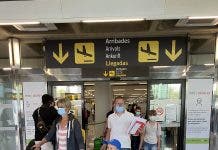