THERE’S finally water in the lake. For months my normally lakefront cottage has overlooked a dust-bowl of Steinbeck-esque proportions.

It did, however, inspire me to begin my own ‘Great American Novel’ – though due to the hedonistic excesses of my youth (and beyond) this autobiographical work is less ‘The Grapes of Wrath’ and more ‘The Wrath of Grapes’.

But once again I digress. The rain finally came and the reservoir began to fill. For a few days as it collected the water from the Sierra de las Nieves and the nearby La Concha mountain there was a constant background noise of rushing water.

The current brought down all sorts of flotsam and jetsam, including tree trunks, plastic bottles and the occasional body of a Russian mafia member.

The water level began to rise leaving me with a predicament. One of the boats had been marooned in the middle of the lake since summer and had filled with water, so I scrambled down and bailed it out.
Unfortunately I decided not to moor the boat, as the water was at least 15 feet away.

A few quick glances from the terrace during the afternoon confirmed that the water level was rising slowly. ‘Not a problem’, I thought to myself, ‘I’ll nip down after I’ve watched my film and moor up’.

Two hours after the latest Guy Ritchie movie I trudged down to the water’s edge in my dressing gown to see the boat floating out across the lake in the moonlight.

As it was only 20 feet or so from where I stood, I toyed with the idea of wading out to retrieve it, but then remembered that last time I tried that, I ended up six feet under the surface when I stepped off a submerged ledge.

Resolving to look for it in the morning, I had a fitful night’s sleep, imagining the boat being taken by a fast flowing current and slamming into the dam at the far end of the lake, or worse, incurring a huge fine from the Junta for not mooring correctly.

Up at crack of sparrowfart the next morning I was hugely relieved to see that the boat had come to rest on the bank opposite the casita, so I paddled over with the kayak and rowed the boat back Gondolier style.

If you heard a smack of O Solo Mio echoing through the hills above Marbella, it was probably me… 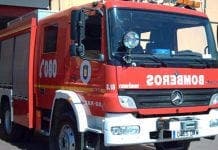