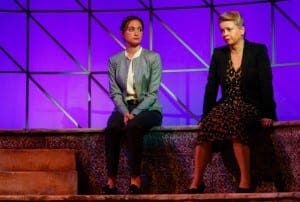 SPAIN’S age of austerity has inspired a new play in the UK.

Young, attractive graduate Sofia has landed herself a well-paid job – despite unemployment of nearly 25% – as the PA to a leading banker.

Alexandra Wood’s ‘darkly funny’ two-hander – called Merit – is based on the world’s of rich and poor in Spain, and a girl trapped between them.

“In these times of financial chaos, the bankers are getting filthy rich whilst others are left unable to support their families. A storm is brewing, people are desperate – just what will they be driven to? Suicide? Murder?” reads the play’s publicity.

“This is a war, us against them, the rich, the greedy: the ones that got us into this mess.”

Merit, which played at the Drum Theatre in Plymouth, ran until February 14.