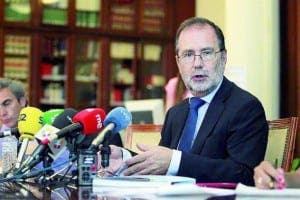 SPAIN’S legal watchdog has launched an investigation into ‘back door’ payments made to judges and magistrates in Madrid.

The investigation – by the General Council of the Judiciary (CGPJ) – will probe payments made to legal staff by global technology company Indra in return for IT consultancy contracts.

The payments were made in relation to a new computer system for the region’s courthouses.

The preliminary investigation has now been launched into whether the head of the Madrid Regional High Court, Francisco Vieira, among others, may have broken regulations by accepting such payments.

Although Indra is responsible for paying the consultancy fee, the payment orders come from the Madrid Justice Board

The majority of private sector companies hire IT technicians to bring in new technology systems, and employees are usually required to attend training sessions for the new system.

But workers are not usually paid for participating in the training sessions, unlike the Madrid judges and legal staff in this case.

The regional government has released a statement insisting that ‘the justice system communicated in 2011 the need to compensate the efforts of the potential participants in order to guarantee their collaboration’.

Vieira will appear at the headquarters of the CGPJ this week to explain, but has meanwhile released a statement insisted the payments were legal, declared and above board.