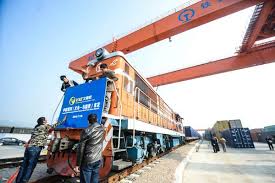 THE first train to travel along the world’s longest railway line has returned home after four months on the tracks.

After embarking on the 26,000 km round trip connecting Spain and China, the Yixin’ou cargo train has returned to Asia.

Travelling through Kazakhstan, Belarus, Poland, Germany and France, the train arrived with cheap goods and returned to Asia with olive oil.

The line is expected to reduce the cost of Asian-produced goods in Europe, as flying costs are eradicated.