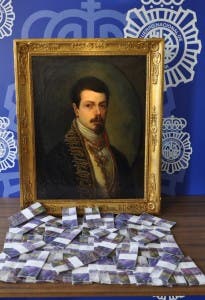 TWO Spanish brothers who planned to swindle an Arab sheik themselves became the victim of a scam, when they received 1.7 million Swiss francs in photocopied bills.

In investigating the brothers’ attempt to sell a forged Goya painting police have uncovered a string of swindles leading to the pair’s arrest.

The brothers, from Girona, tried to sell the sheik the painting – the Portrait of Antonio Maria Esquivel – for €4 million.

The transaction took place in Turin, where a person who said he represented the sheik gave the brothers the 1.7 million Swiss francs.

In turn the siblings gave €300,000 – to cover commission costs – to another person in Girona, who also claimed to be representing the sheik.

But when the brothers arrived in a Geneva bank to deposit the money, it was pointed out to them that the bills were in fact photocopied fakes.

To rub salt into the wound, the brothers now face charges of swindling.