MORE than 70,000 people have signed a petition to save two dogs from an owner who dragged them along roads tied to the back of his car. 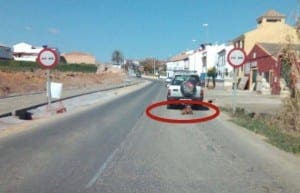 The unidentified male owner, from Sevilla, was pictured driving his Suzuki jeep with two dogs tied to the bumper, leaving a bloody trail in his wake.

The wounds and scars on the animals suggest this was not the first time.

Now the campaign to have the Olivares man exposed has spread like wildfire.

Expat Pat Waterhouse, who looks after around 50 dogs in her Alora home, has called for the man to face the maximum penalty.

“I have been told the two dogs are still with him, it’s absolutely disgusting,” she told the Olive Press.

“It beggars belief, someone in Olivares must know this man and they need to come forward and expose him.”

Hundreds of comments on the change.org petition and on Facebook have slammed the actions as ‘disgusting’. 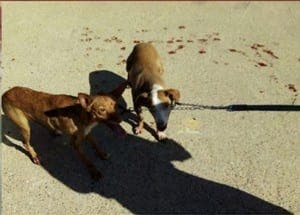 The petition was launched by local Spaniard Maria Pía Rosa Palacios, who said: “This is just the tip of the iceberg and the animal abuse in Spain, especially Andalucia, is out of control.

“Every year we watch helplessly as hundreds of animals suffer and even die at the hands of their owners, who go unpunished.”

The power of the press!: Expat dogs in Granada rehomed after Olive Press story