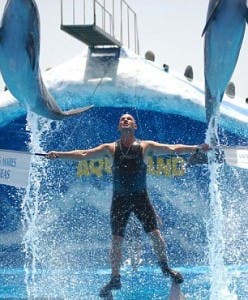 A SPANISH dolphin trainer accused of abusing the animals has been found dead in Mallorca.

Barbero was set to become vice president of the Georgia Aquarium in Atlanta, USA, before allegations of animal cruelty surfaced on social media.

“Georgia Aquarium began a search for truth in hopes of disproving these unsubstantiated claims,” he said.

“Sadly, (Barbero) and his family received death threats, and groups and individuals rushed to judge him.

“He was not given the right or the privilege to be considered innocent until proven guilty.

“His death is untimely, unnecessary and unjust.”

Barbero was accused of being one of those videoed on a social media campaign to out the abusers.

Despite the low quality of footage and the video’s unconfirmed authenticity, anti-animal cruelty posters emerged on Twitter and Facebook blasting Barbero.

Barbero’s employer in Spain, Marineland Mallorca, denied the allegations and said it planned to take legal action against Barbero’s accusers.