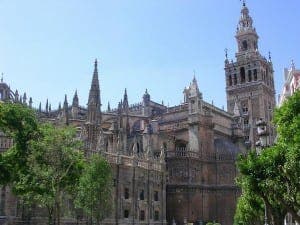 THERE’S nothing like starting the day with a good bit of Spanish grammar.

We’re just a couple of days into my six week mission to learn Spanish and I can’t pretend that my brain isn’t already reeling.

It’s been a good six years since I left school and another good three years since graduating from university and it’s proving a shock to the system to be back in the classroom.

But the past two-and-a-half days have been great. Arriving on Sunday evening to a sun-bathed Sevilla was quite an end to a weekend of farewells, and a stroll through the park at twilight was the perfect nightcap.

But it was up bright and early the next morning to navigate my way through the Sevilliana maze of streets to find Clic, the language school that has taken me under its wing and taken on the challenge of teaching me Spanish in just six weeks.

I’ve already spent a year on the mean streets on Estepona learning Spanish ‘street-style’ (which is pretty much trying to have conversations with people) which I thought had served me pretty well up until now.

How wrong I was. Turns out that although I can speak and understand Spanish, mas o menos, my grammar is atrocious, hence it’s back to square one for a proper grounding, classrom-style.

Tune in tomorrow to hear more about Clic and the Spanish ‘sorting hat of doom’ tomorrow.

P.S Apologies for the stock ‘La Giralda’ image, I had the perfect photo to use but only went and put part of my thumb over the lens…Numpty.