IF you haven’t ridden one of its world-famous burro taxis, you must be something of an ass.

But the famous donkey-drawn carts are anything but the only carrot drawing tourists to this cobbled village these days.

Known from New Jersey to Japan for its chocolate box charm, this classic Spanish hilltop town has many other claims to fame.

And with Tuk Tuks and police Segways (see Page 30) now adding to the mix, even the local transport system refuses to stand still!

Mijas was discovered internationally by bohemian artists and writers in the 1950s and 60s who fell under the spell of its Moorish vibe.

If stepping into the pages of a book is your thing, read historian Ronald Fraser’s 1973 historical homage The Pueblo: A Mountain Village on the Costa del Sol.

The expats who followed were equally captivated, making Mijas one of the richest towns in Malaga province.

Despite its peaceful hilltop home, 8km from the fleshpots of Fuengirola and its municipal ‘other half’, Mijas Costa, the population is 40% foreign, giving the place a pulse of its own.

And nowhere does that pulse beat more vibrantly than the colourful Bodega del Pintor, which is heaving with expats and locals throwing their finest salsa moves when I look in on my first evening in the town.

Maybe it’s something in the water but dance was never in short supply during my 24-hour stay. And it isn’t limited to the hours of darkness.

The main square is a weekly flamenco free-for-all.

The conversation of stallholders, flower sellers and spectators gathered around the Plaza de la Constitucion is subdued to a whisper by the spectacle of guitar strumming, soulful singing and flailing lace sleeves. 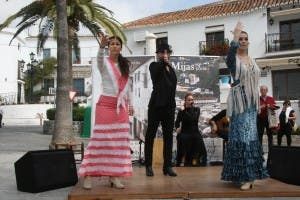 There’s a free show here every Saturday, and another on Wednesdays outside the tourist office in Plaza Virgen de la Pena, both at midday, weather permitting.

It’s as good as any you’ll see at Sevilla’s tobacco factory or Granada’s cavernous haunts, and one of the best seductions drawing trippers to this pueblo in the clouds every week.

Start your tour at Mijas Tourist Office, one of the oldest in Spain and extremely switched-on. The bilingual staff will give you a map with a walking route and point you in the right direction.

Depending on your internal GPS and frequency of pit stops, it will take you to the main sights in under two hours.

And get this: They’re all well-signposted in perfect English, something of a rarity in Spain!

With two Mudejar churches, the old Arab wall, three museums and a wealth of courtyards, shrines and garden – all overlooked by the white Calvary chapel – Mijas has masses of cultural appeal.

Locals leaning from shutters or lounging in beaded doorways spot my map from a mile off and want to help when I stray from the path.

The winding, whitewashed streets lined with artisan emporiums and hung with ceramics and trinkets demand to be wandered.

First I head for the shrine of the Virgin of the Rock, a chapel excavated by a Carmelite monk and dedicated to Mijas’ patron saint in the 17th century.

According to legend, two shepherds discovered her when they were guided to the spot by a dove in 1586.

This is the first of many ‘miradors’ from which to view Fuengirola, its coastline of hotels resembling jagged teeth, and across a cluster of urbanisations and golf courses to Mijas Costa.

Plaza de los Siete Canos may not compare to the thrills of Madrid’s Plaza Mayor but its low-key Andalucian architecture has charm.

The small but handsome bull ring, built in 1900, is one of only a few in Spain that is oval not round.

These days it’s used for concerts as well as bullfights.

With a couple of dozen watering holes and cafes surrounding every cultural sight, refuelling is no problem and if sugar levels falter, a seriously chocolatey hot chocolate can be found at the Mayan Monkey, which has two cafes and its very own factory in the town.

There are loads of atmospheric places to eat and foodies will be flabbergasted with the choice! Congratulations, Mijas Tourist Office, for striking a perfect balance between catering for tourists and preserving authenticity.

History lovers will enjoy the municipal museum, the flour mill and the well-preserved churches while kids (and grown-ups who’d rather not be) will be spellbound by the museum of miniatures, El Carromato De Mijas.

Among the baffling exhibits are shrunken heads, the Seven Wonders of the World painted on a toothpick and Da Vinci’s Last Supper, reproduced on a grain of rice!

One euro meanwhile will buy you a bargain blast into the past at the excellent Folk Museum where you can see ancient artefacts and convincing mock-ups of how Mijas houses would have looked centuries ago.

The exhibition also revisits the pueblo’s roots in wine-making and weaving esparto products. The Mijenos are fiercely proud of this heritage and are pushing to bring it back.

The latest attraction is a tour by tuk tuk, which launched this month, and costs from €7 to 9 per person.

“We’re really excited about the tours and there has been loads of interest for this new project,” says founder Myriam Van der Zalm.

But thankfully the famous burros are not living on borrowed time.

The donkey taxis and horse-drawn carriages show no sign of being sidelined by these new-fangled machines that are all the rage in the Far East.

And that is the key to Mijas’s success… a harmonious coexistence between past and present, newcomer and old timer, foreigner and Spaniard.

If you’re leaving by car, before heading down to the coast, take the windy backroad up towards the Guadalhorce Valley for the most harmonious perspective of all.

From here you can see the pueblo shining bright like a diamond in its hilltop setting, just as the tourist brochures promise for ‘the jewel in the Costa’s crown’.

Jon Clarke (Publisher & Editor) - 17 Jan, 2022 @ 17:34
A GERMAN TV investigation has uncovered a series of fresh witnesses and information linking a convicted paedophile to the snatching of Madeleine McCann. The documentary...