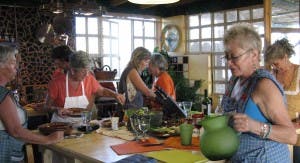 SPANIARDS are among the worst home-cooks in the world… according to themselves!

A surprisingly low 20% of Spanish people said they had a ‘good knowledge and experience about food and cooking’ in a recent survey for market researcher GfK, putting them close to the foot of the table.

With only Belgium (19%) and South Korea (13%) below them, Spain is desperately lacking in budding chefs.

Overall, 29% of people in the 22 countries surveyed claimed to know their way around a kitchen.

Topping the list was South Africa and India, with 50% and 48% of people keen cooks.

Turks, Ukrainians and Indonesians also fancy themselves in the kitchen, while the French, Russians and Australians don’t think too much of their skills in front of the stove.

Meanwhile, 34% of women surveyed said they were top chefs compared to just a quarter of men.