THIS week I started back at school after the Easter break, and normality, for now, has returned.

I wanted to stay in Granada over Easter because I had never experienced Semana Santa and all the processions that took place around the city.

It was pretty impressive watching the pasos – the massive throne-like religious monuments that are carried through the streets by around forty men who are shuffle inside. The hooded people dressed as penitentes and the majestic brass bands that often accompany this add to the ambiance of it all.

For a foreigner who hasn’t seen these hooded people before, on first appearance they may seem rather eerie or scary given their constant anonymity under the hats. The cone shaped paraphernalia that they wear, however, has no sinister significance at all and from the young Spaniards I’ve spoken to, it’s actually quite a popular thing to have dressed up as one in a procession.  At school I told the kids that I’d never even seen a procession before.

Little faces gawped at me.

Most of my Spanish kids haven’t been outside Spain let alone in England, so naturally none of them realised that the closest thing to carrying some form of a cross in England at Easter time involves transferring hot cross buns from packet to oven. 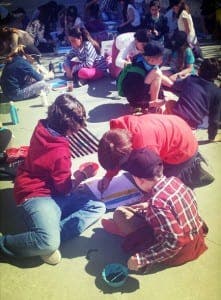 I’ve already spent a lot of time explaining that the United States is not the United Kingdom and that London is not a country. When one poor year 4 asked me why Ireland has a St Patrick’s day as a bank holiday rather than an Andalusian Day, I turned to my co-teacher and begged him to explain.

Prior to the Easter break, we recently welcomed an English group of year fives from Taunton which was particularly exciting for everyone at school. It was the first time in a while that I’ve been surrounded by so many English people in one place and it felt rather strange albeit good to not be the only pasty sun-deprived person in the school building.

All sporting shorts, sunhats, sunglasses and sandals, these kids fantastically resembled classic Costa del Sol British seeking tourists. It happened to be relatively hot when I first met them and considering one of the teachers mentioned that there had been frost when they left, they had a good enough reason to be dressed this way. The Spanish children, on the other hand, were all dressed ‘normally’ – in jeans, trainers and jackets and couldn’t understand why the English lot weren’t in the same.

At break time, there was a mass order of churros for the English class to try. Most of them had never tried the greasy, doughnuty-like treat before and some of them weren’t huge fans. In turn they had brought a cricket set and a rugby ball in the hope of teaching the game to the Spanish. I use the word ‘hope’, because the tag-rugby-playground encounter between Spain and England that unfolded before me was played with little success. The Spanish boys couldn’t understand why the ball had to be passed backwards, whilst the English kids were struggling to remember the verb ‘to pass’ in Spanish and so the communication difficulty that arose meant that the game didn’t really bear a resemblance to rugby at all.

The next day involved a trip to the port in Motril. This excursion was a brilliant example of the bureaucracy in my school. Firstly, we were late driving down to the port. When we eventually arrived, my fears were confirmed as to why my coordinator had been complaining to the headmaster in the car: he had organised the wrong bus for the children.

After half an hour wait the children eventually arrived. This was an educational part of the trip – the children were to learn about the port’s history, the town’s fishing industry and the ferries that sail across to Morocco. The weather was rather unfortunate, as the port was completely shrouded in fog so it was barely possible to see anything.

The most exciting part of the trip was looking inside a stationary police patrol boat which was positioned a good metre away from the port. This required a special method of boarding with the help of two port officials who, one by one, practically threw each child onto the boat.

As I stood watching in silence with the rest of the English teachers, I glanced sideways and briefly caught the looks of horror on their faces. They were watching the Spanish way of ‘health and safety’. 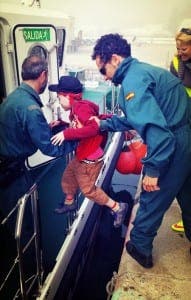 All the children were nevertheless successfully transported to and from the boat without any difficulties, although the teachers and I chose to stay and watch. The next part of the trip involved a short bus trip for a mid-morning break in the port’s café, which we had to travel to by bus for security reasons. It appeared the Spanish driver hadn’t heard of a ‘head count’ before and started driving away before it was learnt that there were two children and a teacher who still happened to be in a nearby toilet.

No more school trips seem to be on the agenda anytime soon. For all the panic and organisation that they’re worth the tranquillity – or shall I say noisiness – of the classroom is much preferred.