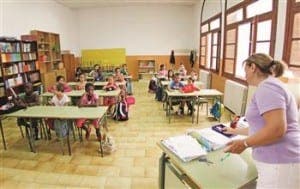 A massive 90% of Muslim students enrolled in Spanish schools have no access to Islamic religion classes, according to a Union of Islamic Communities report.

In total, there are 275,324 Muslims students in Spain – making up almost 4% of the Spanish population.

The majority of Muslims in Spain are from Morocco although there is a significant number of Pakistanis and Senegalese Muslims in Barcelona, Valencia and Logrono.