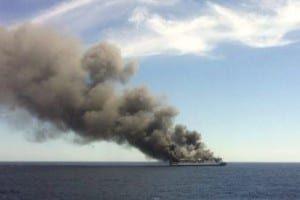 MORE than 150 people were forced to abandoned ship when a ferry went up in flames en route from Mallorca to Valencia this afternoon.

Miraculously all 157 passengers and crew members on board made it off the burning Acciona Transmediterranea vessel without serious injury.

Three crew members have been airlifted to hospital after inhaling smoke from the blaze but are said to be in a stable condition.

A helicopter and four lifeboats were deployed to evacuate the passengers, who were then transported back to Mallorca.

The ferry left its port in Mallorca about an hour before the fire broke out, around 18 miles west of Dragonera, a small island west of Mallorca.

The ship is still ablaze and port authorities have confirmed that it will most likely sink in the sea.

The cause of fire is currently unknown but Spain’s Ministry of tourism announced that they would be launching an investigation.