THE bodies of the mother and two young daughters who died in the Gibraltar ‘murder suicide’ have been cremated and will soon be laid to rest. 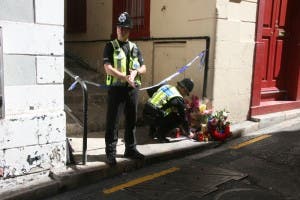 Grieving family members gathered for a private family mass on Wednesday May 13 at St Theresa’s Church in Gibraltar to pay their final respects.

The ashes have now been taken to the Canary Islands, where Perez’s family live, to be buried.

The Danish father of Amanda and relatives of John Joseph Shannon, father of Eve, were also present.

But the 34-year-old Liverpool man’s body was flown back to the UK weeks ago for burial there.

The family of four was discovered dead in a horrific scene on March 30 by a friend in whose flat they were staying in the Boschetti’s steps area.

An inquest has been carried out but the results have not yet been made public by police who, from the outset, did not seek anyone else in connection to the killings.

Widespread assumption is that Perez killed her partner and daughters before committing suicide due to Shannon’s defensive wounds.