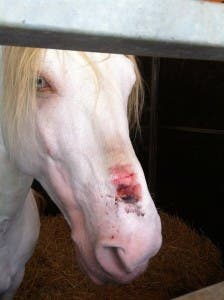 In a damning dossier compiled by an expat group, dozens of stallions were photographed with horrific injuries at the SACAB event in Coin.

Expat Michelle Lewis has now set up a petition to demand better checks are carried out before next year’s event.

“This form of abuse is unacceptable,” she said. “We want more inspections by an independent vet and in the case of abuses the owners and trainers should be told to leave the event immediately and banned.”

German expat and horse-owner Claudia Pank, 49, added: “It is very upsetting and completely barbaric to see horses treated this way.

“This event is advertised as the biggest horse show in Spain, and it should be setting the standard.”

However an anonymous trainer contacted the Olive Press to defend the fair.

While he admitted some horses had injuries, he pointed out that they were horses commissioned for the performance show rather than for competition use.

More than 175 horses were on display at this year’s show.

The petition received more than 100 signatures in 24 hours after being set up on May 13.

Organisers of SACAB and Coin town hall have so far failed to respond to Olive Press questions.

To find the petition visit www.thepetitionsite.com and search ‘abusos sacab’.

WATCH: Call for ban on tourist carriages after horse collapses in heat during Malaga feria on Spain’s Costa del Sol