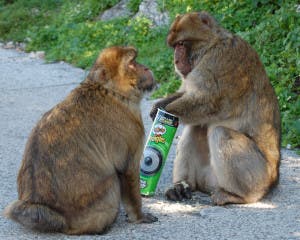 A BRITISH tourist claims to have been ‘sexually assaulted’ by monkeys while visiting Gibraltar.

Melissa Hart, 23, travelled to the Rock on a day trip from Marbella, excited to see the famous Barbary Macaques.

But when two began to pull at her clothes and hair atop of the Rock, she began to panic while other tourists close to her laughed.

“I felt totally helpless as these two monkeys grabbed and pawed me in my most intimate areas,” she revealed.

“Then, with a yank, one of them pulled my bikini top straight off.”

Hart, a baker from Macclesfield, continued: “I was being sexually assaulted and these people all thought it was a great joke.”

Luckily, her screams quickly grabbed the attention of a warden, who ran in and freed her.

However, she was so angry she insisted in filing a police report, which also failed to go to plan.

When she revealed to the policeman on duty she had been attacked by the monkeys, they were unable to take her claim seriously.

While the policeman told her he was ‘sorry’ for her ordeal, he added that monkeys are ‘wild animals’ and cannot legally commit a crime.

“And if they could, do you think you could pick out your attacker in a line-up?” added the officer, evidently struggling not to laugh.