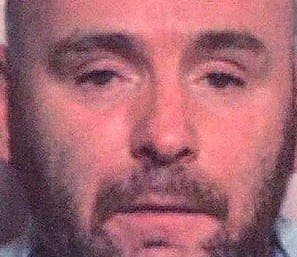 DEREK ‘Deco’ Ferguson, Scotland’s most wanted man, is reportedly hiding out in Marbella having fled Scotland as a murder suspect eight years ago.

The 48-year-old is said to be working as an enforcer for international drug empire boss Christy Kinahan in the Marbella and Calahonda areas.

Ferguson is wanted in connection with the murder of Thomas Cameron, 49, who was killed at a pub in Glasgow in 2007.

Crimestoppers has appealed for information on his Spanish whereabouts for years, but despite high-profile Operation Captura, Ferguson remains on the loose.

A new black and white photo of Ferguson, who is now 50 and stands at just five feet three inches tall, has been released in the hope that he will be captured.

His most differentiating feature is a chunk missing from his left ear, which may or may not have been cosmetically repaired.

“Ferguson is now in his 50s and if he is convicted, it is unlikely he will see the light of day again,” said detective inspector David Wilson, head of Police Scotland’s fugitive unit.

Kinahan is thought to have taken Ferguson on board in 2013 and it is also understood that former Glasgow heroin dealer Richard Hayes is on the drug empire clan’s payroll.