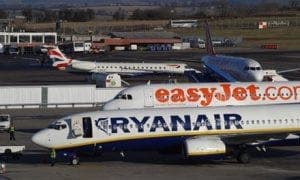 It is the second such action to be taken in as many months and the strikes threaten to disrupt many holidaymakers plans during the busiest travel days of the month.

The USCA (air traffic union) confirmed the strike on Twitter, blaming Enaire – which runs most of Spain’s airports – for failing to meet their demands.

A total of 61 members of staff were fined one month’s salary after missing work at Barcelona’s Control Centre last month.
The USCA are demanding that this money is repaid to those who were punished.

Cancellations and delays: How Spain’s Ryanair strike is affecting passengers on Tuesday