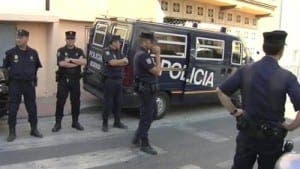 A MAJOR ISIS recruitment ring has been dismantled in Spain and Morocco.

Raids took place on properties in the San Martin de la Vega district of Madrid and in the Moroccan cities of Fez, Casablanca, Nador, al-Hoceima and Driouech.

Just last week a Moroccan who had lived in Spain attempted to attack a French train.

He is suspected of being radicalised by ISIS recruiters in Spain.