Two major traumas for me since my last column. Firstly on a walk by the river – usually the highlight of my day – the dog from hell suddenly appeared from nowhere and attacked me.

His owners go crazy, throwing themselves on the ground. Madness.

It gets worse. I get bitten on my flank. Blood is drawn and according to the other owners I am to blame. Attack is the best form of defence they say. This is not attack, this is downright lying.

And then great nephews appear. Aged three and six, on a 17 day visit – but I can’t count so it seems interminable.

The older one can throw a decent stick and ball, but the younger one takes to poking fingers in my eyes, confusing me with a climbing frame or hiding my food bowl where I can’t reach it.

Fret not though. Toys are brought to appease me, and the wound is healing. There is light at the end of this fairly dark tunnel. 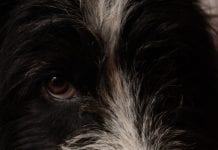