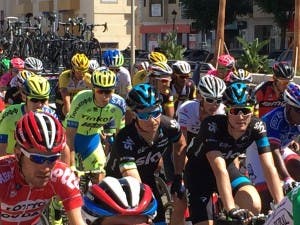 CHRIS Froome stormed back into contention at the Vuelta a Espana after an impressive showing in Sunday’s stage between Torrevieja and Cumbre del Sol.

The British Tour de France winner was beaten into second place by Tom Dumoulin on the summit finish and moved up to eighth in the general classification (GC).

The Team Sky leader was caught by Dumoulin 50 metres from the end of a stage he looked like winning, but is now 78 seconds behind the Dutchman in the GC.

Froome said: “I’m gutted, I gave it everything.

“I thought I had it for a second there. But Dumoulin has shown incredible form in this race. He’s a young rider with a bright future ahead of him.”

Meanwhile, Peter Sagan’s Tinkoff-Saxo team are threatening legal action after he was struck by an official race motorbike at Saturday’s stage.

The Slovakian rider became the latest big name to withdraw from the Grand Tour as he sustained first and second degree burns following the crash 10km from the stage end.

Belgium’s Kris Boeckmans is in an induced coma following a crash on the same stage with Tejay Van Garderen and Dan Martin also forced to pull out.

Today’s 146km stage is from Valencia to Castellon.