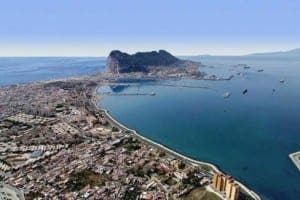 LA Linea is creating a ‘duty-free zone’ to compete with Gibraltarian trade prices.

The mayor of La Linea, Juan Franco, is determined to improve trade across the border in ‘both directions’.

He paid his first official visit to the Rock in August and met with Chief Minister Fabian Picardo to discuss the plan.

Jorge Ramos, who heads up similar schemes in Algeciras and Los Barrios, said all the documents for the duty-free scheme have now been signed and work will begin immediately, although the location remains unconfirmed.

“The idea is to give La Linea all the necessary instruments to compete with Gibraltar, so that there is equality of conditions as at present there is not,” said Ramos.

“La Linea is however determined to work with Gibraltar, not against it.”

Since taking office in June, Franco has publicised his intentions to improve relations between La Linea and Gibraltar.

Following a car crash in June of a van containing Gibraltar football fans on their way back from Germany, Franco reached out to the Gibraltar government to offer support.

There have also been suggestions of Gibraltar and La Linea unifying, which received 60% of Olive Press reader support.