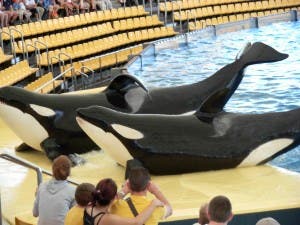 ANIMAL rights activists have called on the authorities to investigate Loro Parque in Tenerife over the mistreatment of its orca whales.

PETA based the accusations on pictures taken in March of orcas with scars that appeared to come from rakes, large quantities of mucus in their eyes and broken teeth.

The park houses six orcas, four on loan from America’s SeaWorld, one born in captivity and one given over by Dutch authorities.

PETA is concerned that the other orcas have attacked Morgan, the smallest whale born in captivity, and that the park is not sufficiently protecting the animals from aggressive behaviour developed in captivity.