CONVICTED killer Kenneth Noye could be on his way back to Spain.

Two-time convicted killer and mastermind of the the Brink’s-MAT gold bullion robbery, Noye, 68, is set to be released from UK prison within the year and has his sights set on a Spain, an Olive Press source revealed.

The crime mastermind hid out for two years on the Costa de la Luz, before he was arrested for the murder of Stephen Cameron, 21, beside the M25, in 1996.

Despite being Britain’s Most Wanted, police took two years to track him down to his stunning multi-million euro villa in Atlanterra, near Zahara de los Atunes.

The isolated home sits in stunning grounds and has been allegedly maintained by his family, during his time inside.

“It is a stunning place and he is definitely planning to come back,” the source told the Olive Press. “When he was hiding out there he was very careful about what he did and where he went.”

“He almost only spent money locally and always in cash.

“However every once in awhile he would visit mates for a blowout in Fuengirola.

“He would drive up, have a few hours on the beers and then be back at home before anyone had any idea where he was living.”

Noye, 68, has a string of offences to his name, including the murder of detective John Fordham, who had been undertaking surveillance at his house in Kent.

However despite getting life for the murder of Cameron, he is now set for early release for good behaviour, with prison officials describing him as a ‘model inmate’. 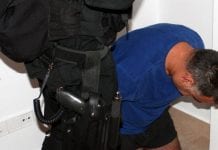 DIRTY DOZEN: Check out our rogues gallery of notorious fugitives captured while on the run in Spain