I’VE seen the ‘apes’ loads of times. I know their game.

Show them a glimpse of food, or plastic packaging, and they’re on to you in a flash.

Or so I used to think… in the days before I met Barbary macaque expert Brian Gomila, whose forgiveness I beg for my calling them apes in the very first line. Sorry Brian.

It was actually Brian who contacted me, having read a rather left-field piece of prose I’d penned from the point of view of one of the macaques this time last year.

Apparently I was ‘lacking in key scientific areas’. So, after slowly recovering my bruised ego, I agreed to let him show me the real Barbary macaques, and teach me all the things that hardly anyone knows.

It turns out he was right. I didn’t actually know the monkeys at all, and I boldly predict that 99% of tourists and a similar percentage of Gibraltarians don’t either.

That’s how I found myself tearing up the Rock to St Michael’s Cave to meet Brian, of Monkey Talk – Gibraltar, for a two-hour outing that would change my perception of the Rock’s most famous residents for good.

We met at 7pm and began with an introduction, as Brian – who completed a masters in primatology at Roehampton University – set the tone for the evening.

“The first thing we did when we met was to greet each other,” begins Brian. “And the macaques do exactly the same.

Thus we head off past St Michael’s Cave towards a rocky outcrop above Spur Battery , overlooking Europa Point. 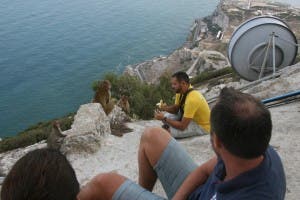 There are seven distinct groups of macaques in Gibraltar, each one moving around as a unit and sleeping within their established territories. We were destined for the group at the southern tip of the Rock where the Royal Anglian Way troop had decided to settle for the night.

So after manoeuvring ourselves down a steep gap we stepped out onto the rock face, found a cosy wedge and settled in as the last of the sun’s rays beamed across the bay .

Within seconds, I was speechless. The same monkeys I had seen ravage shopping bags, tear at zips and prowl menacingly at the Cable Car Top Station were nonchalanty wandering right past our group.

A youngster perched in front of us, picking at his hands and rubbing them. Why? He had just fallen victim to the merciless prickly pear, of course.

Then the dominant male in the group sauntered up to my camera lens, took a long, calculative look, and sauntered off to find something more interesting to look at.

Brian explained how it is not the older males who concern him when taking groups out, but rather the younger, more excitable adolescents, that he hasn’t had the chance to properly gauge yet.

But that doesn’t stop him showing us his well-rehearsed routine. “Who’s this food for?” he asks, slowly producing a banana from his pocket.

“You?” comes the pantomime reply from myself and the four others. Then, with two monkeys sat directly in front of him gazing longingly at the banana, he preceded to peel and eat without a worry.

I could barely believe this was possible, the monkeys simply sat and watched before losing interest and moving off.

If I tried this stunt at the top of the cable car I’m pretty sure I’d end up buried under a furious melee of Barbary macaque before I’d even taken a mouthful.

But Brian was showing me a completely different side to these Jekyll and Hyde creatures.

He explained that by not cowering in fear from the macaques, by simply eating in front of them as if they were no bother, he is asserting his dominance.  Whereas normally, tourists shriek in terror and jump back, giving the macaque the impression it is the one in charge.

This mesmerising moment is only interrupted by a loud squeaking noise. It’s a younger male in the group, making what’s known as a ‘contact call’. This apparently lets the other members of the group know where he is, and not to all disappear off without him.

And it turns out his family had found a delightful perch in a ledge half way up the cliff above, where several macaques were engaged in a thorough grooming process. This primate pampering is all about relieving stress, we’re told, after an argument more often than not.

So this is how the day draws to a close for this affable group of macaques, preening halfway up the rock, at a great vantage point, as the sun sets its last rays over the Europa Point lighthouse and large boats lit up like birthday cakes chug through the dark, blue sea.

Brian – a man with an analogy up his sleeve to suit every occasion – becomes almost wistful in these last, stunningly beautiful moments. “Part of the problem is that the macaques are seen purely as a tourist attraction, whilst the locals are left to put up with their antics,” he remarks.

“Gibraltarians should be proud to share their home with the only free-ranging, non-human primates in Europe.”

He is going the right way about changing perceptions though, having taken small groups of children on his excellent trips, and currently liaising with the schools about working together.

“Educating the younger generation is key to sustaining this wonderful environment, and these fascinating creatures,” he adds.

Brian has spent time with the macaques from a young age, finding respite in these hidden corners of the Rock, and now plans to undertake a primatology PhD at the newly opened University of Gibraltar. “They have taught me things about myself and the way humans socialise,” he explains as we slowly leave our watching place.

And while not everyone is going to learn life lessons, I can guarantee an evening with Brian will completely change your perception of these friendly primates. And so it should, for it’s time we started talking about the Dr Jekyll side, not Mr Hyde.

• If you would like to take part in an eye-opening macaque familiarisation outing with friends, family or as a corporate team-bonding event, get into groups of 6 to 8 and email Brian on monkeytalkgibraltar@gmail.com or visit the Monkey Talk Gibraltar Facebook page.

Should I stay or should I go now?

INTERESTINGLY, while the females remain with their group for their entire life, the adolescent males have a choice and may chance it in another group.

Occasionally this decision may be forced upon them if there is too much intra-group competition from rival males.

“IMAGINE a kind stranger just walking up to you and putting a tenner in your hand for no apparent reason. Well that’s exactly what giving a monkey free food is like”, explains Brian.

This is a problem exacerbated by some tour guides, who encourage feeding the macaques, despite signs warning against it.

Together with the provisioned foods provided by the Macaque Management Team, there is enough natural food for the monkeys on the Rock. They don’t need your twix.

WHEN the mating season starts in October, it is easy to see physical changes in the females, such as their prominent ano-genital swellings. The mating system is regarded as promiscuous, with females mating repeatedly  with a number of males.

After a five and a half months of gestation, babies are born in late spring/early summer. Except there’s one problem.

All the males think all the babies are their offspring. In reality, short of verifying paternity through analyses of blood samples nobody knows for certain who the father is.

The eternal confusion has a benefit though; they all take turns to care for all the babies. Barbary macaque males are excellent fathers.

As for the babies, these play a very important social role within their group, acting as a focal point for all group members to be more tolerant of one another.