WE do it once a week, only a minority of couples enjoy sharing the experience and 67 per cent of women prefer to do it alone, according to ‘retail anthropologists’, aka people in America paid to come up with the staggeringly obvious. 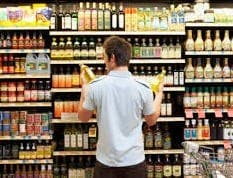 That’s the big ‘grr-ocery’ shop and we women could have told them for free that men are useless at bringing home the right bacon.

Why is that guys who are perfectly capable of making decisions when seated behind an office desk are at a total loss when asked to produce an inventory of domestic requirements otherwise known as a shopping list?  According to research, most men never write one.

They stare into the cavernous wastes of a refrigerator bereft of staples, then bring back crisps and pickled gherkins and enough beer to refloat the economy but nothing you can actually combine to make tonight’s dinner.

Perhaps the emasculating act of pushing a supermarket trolley causes a testosterone blockage that leads to a brain melt-down. But when will men learn that that the first priority, when entering a Spanish supermarket, is to take a ticket for your turn at the meat counter? There’s nothing that turns me into a basket case quite like the sight of my loved one languidly feeling up avocados while a queue longer than Syrian migrants at the Hungarian border is building up in the butchery department, wanting everything cut up ‘en trozitos’.

And unless your relationship is rock solid, steer well clear of the pick-and-weigh because what it is about men and tomatoes? Why can they never pick a firm salad tomato when they seem to have no problem at all in the breast department?

Another rule of thumb is, never split up. You won’t find him again, no matter how many aisles you look down, until you meet up at the checkout. Then you’ll spend another 10 minutes removing half the trolley contents because your credit card won’t cover them, which drives everyone else crazy. But if you have shopping intolerance, join the queue. The average human spends 273 days of their life waiting in line and men must take some of the rap.

They behave like kids in supermarkets. They want alphabet spaghetti and Variety Pack cereal. They want Tibetan goat’s cheese and kumquats and they want to go to another shop for the Guinness where they do it in widget cans.

And never let them roam free in the toiletry department, where they’ll be thrown into a panic attack by 50 flavours of toothpaste (with or without fluoride, coloured, white, gel or striped), 10 fragrances of deodorant (stick, ball or aerosol?) and hair sprays with more varieties of hold than you’d find in the World Boxing Federation handbook.

We won’t mention the size of the bill, the time I last let Him Indoors loose in Mercadona, the fruit mountain in the fridge (what do you do with kumquats anyway?) or the tube of Preparation H he mistook for moisturiser. But even if neither of us suffer from piles, it’s not all bad news. Sandra Bullock swears by haemorrhoid cream for reducing wrinkles!

Easter: When will supermarkets be open during Spain’s long weekend?