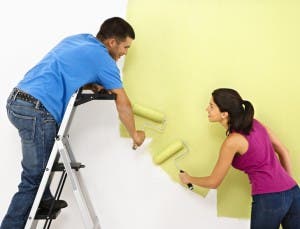 THINK Christmas and the smell of a freshly-painted living room isn’t what normally comes to mind. Unless you live in Gibraltar, that is.

For residents of the Rock, a ‘winter clean’ is as traditional as pulling crackers, and this year is no different.

Indeed, according to two leading suppliers, paint is flying off the shelves at more than twice the rate of the rest of the year.

His counterpart at the Cornershop Paint and Trade Centre Daryl Moreno added: “Everybody wants to paint their houses just before Christmas, it’s always been the case.

“That means whenever you smell paint, it reminds you of Christmas.”

“We see a big rise in sales in the run-up to Christmas and it has already started,” added the keen Barcelona fan, who has worked at the Cornershop for five years.

However, residents aren’t painting their townhouses in Christmas reds and greens. With over 15,000 colours in stock, Gibraltarians plump for everything from magnolia to mandarin sunset.

John Culatto - 8 Feb, 2023 @ 15:49
GIBRALTAR’S youth service is planning meetings with the wider public ‘to get informed, discuss and identify the needs of young people’, it said in...