The local festivity gives everyone an extra day off work. It comes just before the Día de Columbus, when Spain commemorates the discovery of the new world. This gives  Jerezanos a long, four day weekend.

The celebrations began on Thursday evening with a live orchestra outside the Church of San Dionisio. Plaza de la Asunción was swamped with people, come out to see the spectacular performance. The event could be heard and seen across the city centre.

“That must have been what those lights were”, commented a local when she walked past a little later on.

The religious climax of the holiday happens on Friday. To really know what is going on really depends on who you talk to.

“Nothing happens, everyone goes away” said a teacher who works in a local school.

“It’s bad because we lose so much lesson time.”

Another teacher from the same school added “There are many, many things that happen on the the day of San Dionisio here in Jerez.”

Indeed, the early morning stream of cars heading out of Jerez implies that many would rather take advantage of the unexpectedly long weekend to travel. One family headed to Granada to see their daughter for the first time in months. A lady living in the city centre used the time to fly to visit her daughter at University in Valencia.

Despite the ebbing population, the celebrations went ahead. The event centres on the day when Alfonso X, King of Castille, was carried into Jerez. His arrival heralded the end of Muslim rule in the city. The cathedral still boasts the minaret, taken from the mosque which formerly occupied the cathedrals location.

The day begins with a procession from the headquarters of the old church, to the church of San Dionisio. It then continues on to the cathedral, where a banner is handed to the church authorities. A chorus then sounds for the singing of Te Deum, translating as ‘Thee, O God, We Praise.’

The Eucharist is then taken at the church of San Dionisio, to mark the religious undertones of the day.

San Dionisio was the first bishop of Paris, and an apostle of Gaul from 250 – 270 AD. It is rumoured that after he was beheaded, he walked seven kilometres, head clutched tightly in his hands, to the hill now known as Montmartre. He handed it over to a devout woman descended from Casulla, before dropping to the floor.

The religious affairs over, Saturday saw Jerez erupt into a massive market of ‘Arte y Artesania’ in Plaza Peones. At midday a flamenco performance was put on, showcasing some of Jerez’s unique heritage.

Another procession was laid on city wide by the brotherhood of the Christ of Love.

Every Church has its own unique brotherhood, founded by the group of bishops that organise worship there. They are represented by their different idols which generally show Jesus and Mary, at varying stages of life and in different states of emotional turmoil.

Although Jerez  came alive to celebrate the day of its Patron, whom refused to die despite losing his head, it led to problems among local people. As all businesses closed their doors for the four day weekend, some were majorly affected.

“I need to go to the hospital. But now I can’t go until next Wednesday”, pleaded one young girl.

The Ayuntamiento of Jerez spared no expense in putting on a truly fabulous show that all should enjoy. Every museum was open, and a chance to enjoy raw spanish culture was put on offer for all.

However, they struggled in promotion.

Many local people had no idea that such diverse festivities were happening. As Spain becomes increasingly secular few chose to listen to the city’s religious roots, preferring to view the Holy Day as a great chance to go on holiday. The fact that so many went away is leaving few in the dark as to what the day is coming to signify. 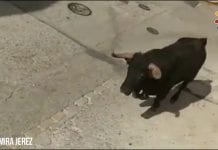