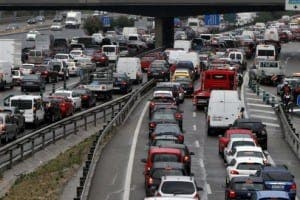 Thousands of commuters, however, were less thrilled to find themselves trapped in long tailbacks when the limit dropped from 90kmh to 70kmh.

It comes after the city’s nitrogen dioxide levels were revealed to be well above the EU guidelines, with almost half Madrid’s measuring points recording dangerous pollution levels.

If the situation continues, non-residents will be banned from leaving their cars in the city centre.