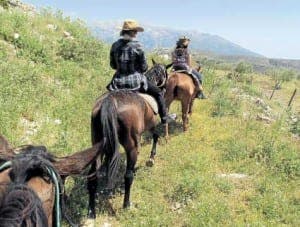 ENRAGED horse riders are fighting to save their depleting trails.

With unpaved roads quickly disappearing from the Axarquia area, equine enthusiasts are petitioning to keep tarmac off the country roads.

Dutch expat Jakobien Huisman, 45, has set up a change.org petition after being forced to shut her horse tours company due to a lack of trails around the Periana area where she lives.

“We are asking the mayor to immediately stop all concrete work on country roads,” she told the Olive Press.

“The preservation of the landscape should be a priority for the town hall.

“We are very concerned that irreversible changes are being made.”

She added: “We have been forced to stop our horse business, because we have no unpaved roads to run tours along.

“Concreting the last remaining ‘carriles’ is very shortsighted and shows no common sense.”

Petition ‘Keep lanes without concrete in the field of Periana!’ has 100 signatories so far.