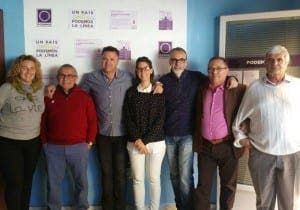 PODEMOS has vowed to improve relations with Gibraltar.

He told supporters a relationship with Gibraltar is crucial to the area’s economic and social prosperity.

“There are so many more things which unite us than separate us. We must embrace Gibraltar as our neighbour,” he said.

Delgado, who joined the Podemos ranks last November following two decades in the Guardia Civil, also slammed the lack of transport connections between the Campo de Gibraltar and the rest of Spain.

“It is unacceptable that a port as important as Algeciras’s has a rail link from the 19th century,” he said.

“It’s the same with the coastal motorway, which began a few years ago in Cadiz but does not yet reach the Campo de Gibraltar.

“These works are also vital for promoting tourism on the coast.”