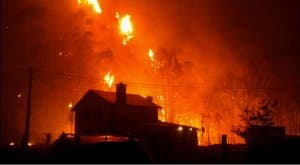 ARSON is being mooted as the cause of more than 120 forest fires currently ripping through northern Spain.

While unseasonably warm temperatures and high winds may account for the blazes, officials suspect underhand tactics from farmers are to blame.

The head of the national forestry association, Raul de la Calle, said high temperatures ‘do not explain’ the fires and added that ‘cattle farming interests could be responsible’.

Firefighters continue to tackle the fires, which span Cantabria, Asturias and the Basque Country.

More than 80 fires are currently burning in Cantabria, where 2,000 hectares (5,000 acres) of land have been destroyed.

About 100 soldiers have been sent to the region.