FORMULA One ace Fernando Alonso will race on.

The Spanish driver has dispelled retirement rumours, saying he will ‘100% be racing’ next season.

It had been hinted by McLaren boss Ron Dennis that Alonso would take a year out of the hot seat following a dismal 2015, during which he recorded just 11 points.

“Goodbye to 2015 because it has been a very tough year for us, very difficult and the performance has been quite poor,” Alonso said. 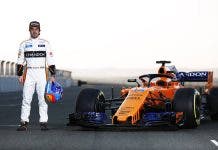