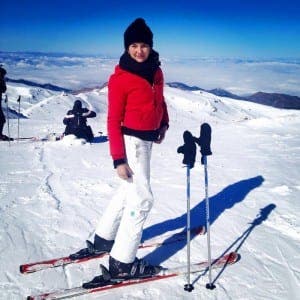 MY colleague lay spread-eagled in the snow, one ski several hundred feet uphill and the other at my feet. “That’s it, I’m giving up,” he sulked.

It had been a testing day on the slopes for ski virgin Rob Horgan, and after a particularly ambitious blue run with three consecutive wipeouts, his sense of humour had vanished without trace.

His grimace was barely visible through the layers of buff, hat and goggles, but the snarls were audible.

“I refuse to ski down this slope; I’ll walk back up and take the lift down,” pleaded my Olive Press colleague, looking longingly uphill, while skiers zipped effortlessly past us.

Our impatient group had sped off back to base, in Pradollano, for a hot chocolate, without a second thought for our Rob. But, the good natured person I am – plus admittedly several years’ experience on the slopes – I stepped in as his impromptu ‘teacher’.

After some cajoling, we set off gingerly down the highest mountain range in peninsular Spain, making ‘giant pizza slices’, as my first teacher had called them, with our skis. 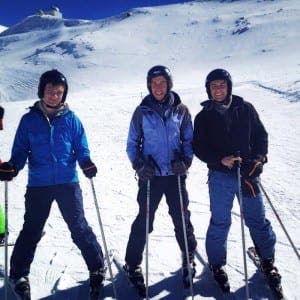 Before long, Rob was back in his stride – or slide – and I was considering a career change, as I sped down the Laguna de las Yeguas piste, which has staggering views towards the Mediterranean and, on a clear day, the Rif mountains of Morocco.

It was the start of a fabulous weekend of skiing in the Sierra Nevada, with bright sunshine, perfect powder snow and some of Spain’s best après ski to look forward to at the end.

The longest piste, Aguila, is a dreamy 6km of easy turns and magnificent views.

The Sierra Nevada is easily southern Spain’s best skiing resort, with 110km of pistes over 1200 vertical metres, famous for being a place where you can ski in the morning and sunbathe on the coast, pina colada in hand, by the afternoon.

Some even brave it in bikinis for the last day of the season in May (la bajada en bikini), an unmissable day festooned with champagne, near nudity and hedonism.

But it’s not just for fun junkies; expert skiers treasure the snow which, particularly in springtime, is a soft and sumptuous ride, unlike the tightly-packed ice found in many European resorts.

Locals proudly describe it as ‘cream snow’ (nieve crema), and most say it is at its best from February to April, although the season often begins in late November, weather permitting (this year it has been a bit shaky to be fair with just a few kilometres open in the middle of December).

And thanks to a €3.1 million cash injection from the Andalucian tourist board – with three new lifts last season, the price for passes has remained the same for the past four years (€45 for an adult day pass) and even less at the season’s opening (€25), with free parking chucked in. 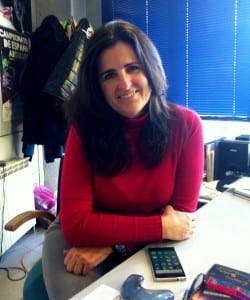 “It is a magnificent resort,” explains Mercedes Delgado, who has worked here for Cetursa, the company that runs the resort, for many years.

The charming 50-year-old was born in Granada and has worked in the resort for 29 years… She is living proof that that is impossible to leave a place like this.

And she is far from the only one, with numerous local business bosses having done three decades … and many more even.

“The really strong points here are the sun and the location,” explains Mercedes.

“The temperature makes excellent snow conditions, a pleasant temperature to be in, with late night skiing too, and the season continues to May making it very versatile.”

She continues: “And our proximity to Granada is a huge plus, whereas many European resorts are very isolated.

“You can come to the Sierra Nevada and also see the Alhambra, eat some famous Granada tapas.. . there is something for everyone.”

She mentions the strategic location: near the beach, not far from Madrid, perfectly accessible from most of southern Spain.

Indeed the 106.8kms of slopes are just an hour-and-a-half by car from Granada’s Costa Tropical and the nearby Nerja beaches, and only half an hour for Granadinos.

Madrileños do not flinch at their four hour drive, while Sevillanos and Malagueños’ can get here in two hours easily. The Portuguese also have a strong following tool.

Alongside a fiercely loyal British crowd, many from Alicante and Murcia, the majority (around 80%) of the Sierra Nevada’s skiers are Spanish.

The resort has kept its authenticity and charm that swanky French resorts have long since lost, with prices to match.

“We have been growing massively in popularity since the world ski championships in 1995,” continues Mercedes.

The night skiing is something the resort prides itself on, with 9am-9pm uninterrupted snow play on weekends at the height of the season, and also late-night skiing on Thursdays.

“But the resort has not been ruined; it is still very Spanish and fairly low-key.”

Spanish is still the lingua franca – although virtually all restaurateurs speak English. By contrast, in high-end French resort Courchevel, where the Russian women walk their Chihuahuas in white skintight salopettes, you’re hard pushed to find a native French speaker.

That said, Russian tourists migrate enthusiastically to the Sierra from the Marbella area, and all nationalities are met with open arms by the hospitable resort staff, 90% of whom live in Granada.

The resort is very family friendly, with the majority of the 124 runs at a beginner or intermediate level. There are 19 green runs, 41 blues, 50 reds and 14 black and orange (the scariest), to be exact.

There are several zones purpose-designed for little ones: with Dreamland and Alpine Garden for infants. There is a magic carpet lift, bike-skiing and toboggan runs for kids or non-skiers.

Pista del Bosque features animal figures for children too, and the new Pista del Mar in the heart of Borreguiles has been a hit since last season with its weekly gymkhana.

More experienced skiers – and hundreds of snowboarders – head to the Sulayr Terrain Park, where there are 110 different ramps and rails, with the largest ski-jump in Europe.

The cool kids also hang out in the Loma de Dilar area, which boasts the biggest permanent half-pipe in Spain, with a cross country ski and snowboard run.

And it’s not just the class skiing that keeps punters coming back (it was my second trip), the nightlife and restaurants are second to none. 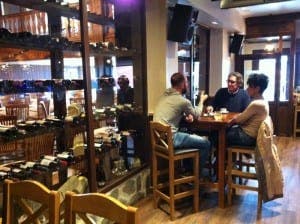 And the Sierra Nevada’s businesses are delighted to meet you, friendly down to earth businesses that do not mock their customers with ski-high prices. In fact you can still get a cana and a tapa for under two euros in various places.

Grab some tapas – or dinner at one of the many good restaurants – before heading to lively watering hole Jaleo, run by Sevillano Roberto.

A laid-back bar with great music and reasonable drinks, Jaleo’s the perfect place to test-drive your moves before venturing uphill to bars, including Soho and Hippodrome, 10 minutes up into the resort. There is even a discotheque Mango.

You may well find yourself distracted by the Marbella Club’s Sierra Nevada outpost, El Lodge, a sumptuous and high-end addition to the local scene, just reopened after a fire burnt it down two years ago.

This is the sort of top end place that rivals anywhere in Ibiza, Cannes or Paris, and keeps the wealthy expats on the Costa del Sol more than happy whether there is snow or not. 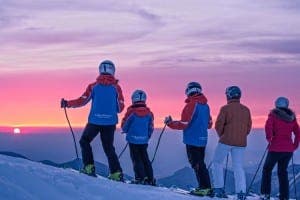 THE Sierra Nevada is incredibly good value, blasting the international competition out of the water.

A day ski pass is €45, while Colorado resort Beaver Creek charges a mind-boggling €131 per day, Whistler in Canada is €91 and Switzerland’s Zermatt can set you back €92.

And that’s before skiwear (found as cheaply as €15 per day, with a small helmet supplement which is a must, regardless of your vanity), accommodation and food where French resorts can demand silly money for the most bog standard of spaghetti Bolognese.

No, in the Sierra Nevada, the Spanish ethos of delicious food and alcohol at highly reasonable prices is exemplified across the resort.

Xavi at Tito Tapas and Paco at La Bodeguita are hospitable bosses with no sign of the ice queen reception to be expected in swankier resorts, and as in Granada city, the ‘free tapas with your drink’ tradition exists in most establishments

Try Tito Tapas’ brie parcels and the goat’s cheese with caramelised apple at La Bodeguita… before washing it down with a comforting, velvety hot chocolate on tap at Mama Goye’s.

It’s not just the food, drink and accommodation that are reasonable – the warm Spanish welcome sets its apart. 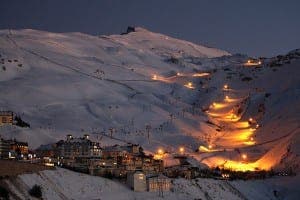 THE resort is one of the most festive places to be in Spain, and the Spaniards know it, as they descend in their droves for Christmas and New Year.

‘Nochebuena’ or Christmas eve, when the Spaniards celebrate the festive season with a huge family meal and lashings of turron, is usually a sell out. Meanwhile ‘nochevieja’, or New Year’s Eve, where massive screens show the countdown in Madrid’s iconic Puerta del Sol, with grapes galore, is a riot. For the eve of the Reyes on Jan 5 the three kings duly arrive on skis. Kids will love it.

Carnival, from February 6-14, also sees a mass arrival for the fancy dress competition, snow-sport contests and spectacles from Granada University, while February 27 2016 will see a huge jump competition, just next to the main resort.