MARGARET Thatcher sent two extra jets to Gibraltar out of fears of an invasion by Spain during the Falklands conflict, it has been revealed. 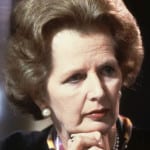 The then UK prime minister ‘agonised’ over the Rock’s vulnerability to an attack from Spain during the 1982 war, according to a recording from her private secretary.

The files are among the few which have been made public to the National Archives under the 20 year rule, formerly the 30 year rule.

Cabinet papers show that Gibraltar was believed to be under no increased military threat, despite Spain’s capability to attack at short notice.

However, Thatcher herself wrote in blue pen in the margin: “This is suspiciously like the Falkland Island assessment before invasion, a thousand soldiers with a land border, no air cover etc.”

Later that year upon discovering Spain was planning to hold an amphibious training exercise 35 miles west of Gibraltar, Thatcher decided to act.

She had a suitable cover story concocted to explain the arrival of two extra RAF Jaguar jets on the Rock.