THE AWOL boyfriend of missing expat Lisa Brown has contacted a Costa del Sol law firm, allegedly from a hideout in southeast Asia. 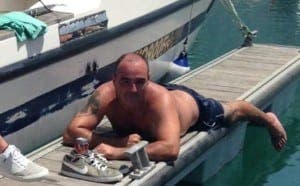 Corner, whose real name is Dean Woods according to a former schoolfriend, has denied any involvement in Lisa’s disappearance in November.

The Olive Press has learned he left contact numbers in Thailand and Vietnam, but none in Portugal, where other sources claim he is really hiding.

He told the firm – which has insisted on being anonymous- he has nothing to do with the disappearance and wants it to ‘put it to bed’.

The firm, which has a branch in Thailand, then contacted a well-known Malaga lawyer to make enquiries on his behalf.

But when they phoned Corner to discuss payment of fees for their services, a ‘mysterious Thai women’ answered and they have been unable to speak to him since.

The legal specialist said: “He said his business activities have taken him abroad and that he has nothing to do with Lisa going missing.

“We agreed to make enquiries but he would have to pay us. I would be surprised if he does not come back online soon.”

Meanwhile, Lisa’s sister Helen Jordan has set up a Facebook page that has more than 25,000 members.

Corner is believed to be on the run from two or three big criminal gangs over several unsavoury incidents including one in Ceuta a month ago involving two women and a possible stabbing.

Lisa was declared missing after failing to pick up her son Marco, eight, from school on November 9.

A search of the nearby area found nothing and police are still treating it as a missing case.