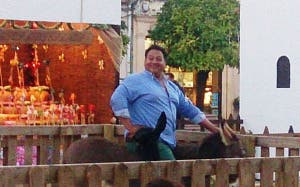 AN obese man who killed a donkey by sitting on it for a photograph is being taken to court by a charity.

The Refugio del Burrito, based in Malaga, has filed a private case against the 38-year-old Spaniard in the hope of reaching a criminal conviction.

Estimated to weigh 23 stone, he posed grinning on a five-month-old donkey in a nativity display in Lucena, Cordoba, in December 2014. Just two days later, the donkey could not walk and had to be put down by a vet.

The man allegedly also kicked the donkey’s mother in the face when she tried to protect her baby.

Lucena City Council removed donkeys from its Bethlehem display this year following a petition signed by more than 17,000 people. However, the display still went ahead with other animals.

An investigation into the donkey’s death was launched but the judge filed the case due to a lack of evidence, until now that is.

“According to the Spanish Penal Code he could be fined, disqualified to work with equines and even go to jail for 18 months.”

The court case is costly though, and the refugio has issued a fresh appeal for financial support.

For more information and to donate, visit www.elrefugiodelburrito.com