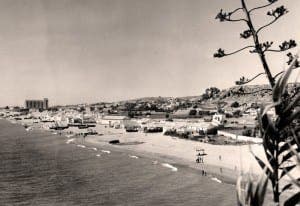 STRETCHING 175 kilometres from Manilva in the west to Nerja in the east, the Costa del Sol is the queen of Spain’s holiday hotspots encompassing over 100 beachside and inland destinations.

It’s hard to believe so much has changed in little more than a century.

At the end of the 1800s, the province of Malaga’s traditional economies – the iron and textiles industries, overseas wine trade and even the agricultural sector – were all failing in rapid succession. As a last resort (sic), a group of Malagueño worthies set up a society in 1897 to promote the region’s year-round sunshine to the nascent tourism industry and drum up an alternative source of income.

By 1918, the great and the good (as well as the great unwashed) could take a dip from the Costa del Sol’s first public bathing beach, Baños del Carmen, which opened east of Malaga to great fanfare. The first golf ball to find the region’s rough was hit on the course near Torremolinos, now part of the Parador de Malaga Golf, not far from the airport, in 1925.

The Spanish Civil War, followed by the Second World War, saw little but fighting on the beaches  for the next decade. But soon after hostilities ended, first the Marquis of Ivanrey, Ricardo Soriano, and then his nephew Prince Alfonso de Hohenlohe, bought country estates around the village of Marbella – home to just 900 back then – and began to lay the foundations for the Costa del Sol’s first resorts: El Rodeo in 1943 and Marbella Club in 1954.

The world beat a path to the door. First (class) off the plane were Hollywood stars like Grace Kelly and Marlon Brando in the 1950s, followed by a gaggle of European aristos and artistic types in the ’60s, along with regular, royal visitors like Saudi Arabia’s King Fahd who first came to Marbella in the 1970s.

Malaga-Costa del Sol International Airport inaugurated its first purpose-built passenger terminal in 1968, opening the floodgates to charter flights packed with package holidaymakers from northern Europe. Cranes sprouted along the coast from Torremolinos west, as tourism took root and skyscrapers filled with hotel rooms and second homes by the sea changed the face, and the faces on the streets, of these former fishing villages

In 1970, visionary property developer (and chum of Franco), Jose Banus, cut the red ribbon at Puerto Banus, buoyed by kilos of caviar and the strains of Julio Iglesias kicking off the first of the port’s jet-set parties, before turning his gaze and his diggers inland to develop Nueva Andalucia. The Costa del Sol’s golf valley is home to the highest concentration of the area’s 60 courses today.

By the 1990s, Marbella’s most infamous mayor, Jesus Gil, had installed his ample rear in the town hall hot seat, overseeing nearly a decade of corrupt municipal management that, to a lesser extent, was copied along much of the Costa del Sol during the bad old days of ‘brown envelope’ urban planning.

In terms of property sales, close to 319,000 homes changed hands nationwide in 2014. Over 63,700 were in Andalucia, with the lion’s share on the Costa del Sol. By the end of the third quarter of 2015, sales registered in the three-month period were the highest in the last two-and-a-half years, leading many to believe a recovery is finally underway.

Foreign buyers were involved in 13% of property sales, an all-time high and a huge increase over 2009’s 4.24%. In the first half of 2015, flush thanks to the strong pound and the UK’s economic optimism, Brits represented 19.8% of overseas buyers, many of whom have found the home of their dreams somewhere on the Costa del Sol.

Spain’s Sotogrande is centre of the polo world this summer