TODAY marks the start of a long trial for Princess Christina and her husband Inaki Urdangarin.

The Mallorca corruption case, which has seen intense international scrutiny, has drawn journalists from all over the world, some of whom waited as long as five hours to witness her arrival.

King Felipe VI’s sister, 50, and her former Olympian husband, 47, arrived at Palma’s Audiencia Provincial courts at 8.15am today in a car with tinted windows, and the proceedings started one hour later.

The trial will judge whether her husband embezzled €6 million of public funds from contracts awarded to the Noos institute, a charitable foundation he chaired, and whether the princess was an accessory.

If convicted, Urdangarin will face up to 19 years in jail, and Cristina could also face a maximum of four – but they both deny doing anything wrong.

Outside the courts a group of around twenty people with banners were chanting ‘Spain will be Republican in the future’ (‘Espana, manana, sera republicana’).

The case, named ‘caso Noos’, has seen the monarchy’s reputation tarnished after the princess and her husband were accused of misappropriating public funds through the Noos charity Urdangarin chaired.

It is said that the case contributed to her father’s abdication of the throne in 2014. 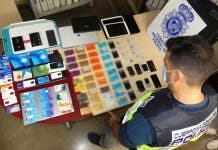