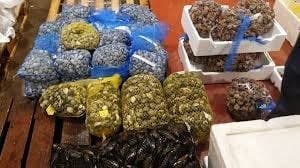 FEISTY fishermen have had a whale of a row over the costas dwindling cockle supply.

The punchy pescadores came to blows after rowing out from Marbella’s La Vibora beach to catch their early-morning haul.

But the calm was shattered by language bluer than the Mediterranean when one fisherman accused the other of swiping his shellfish.

“It was like watching a pub fight,” said an expat who watched the fight from near the Beach House restaurant.

“Then they started to ram each other. Which was quite comical as their boats go about 2 mph.”

The shortage of cockles is believed to have sparked the fight, which drew a crowd of over 30 amused onlookers.