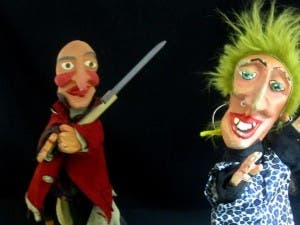 MADRID Town Hall has apologised to parents after a violent puppet show as part of carnival was accused of hailing terrorists and terrifying children.

The puppeteers were jailed without the possibility of bail last Friday for the performance, which used a sign which read “Long live Alka ETA,” wordplay on Al Qaeda and Basque group ETA was the main cause for complaint.

The piece of ‘satirical theatre’ also showed a judge’s effigy hanged a nun stabbed with a crucifix and police beatings, which prompted many parents in attendance to complain.

The show had been commissioned for the Madrid Carnival celebrations however friends of the puppeteers told Spanish media the pair had not known children would be present and that it was never intended to be children’s entertainment.

The mayor Manuela Carmena, 71, agreed the show’s content was inappropriate for children but that jailing the puppeteers without bail was incomprehensible.

There will be an investigation and Spain’s Terrorism Victims Association said it would be taking legal action against the puppeteers.