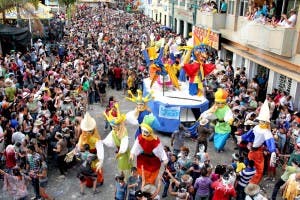 A MALAGA man has been arrested for allegedly kidnapping a three-year-old boy while dressed as an FBI agent after the child’s mother ‘turned her back’.

The mother noticed when he was 60ft away and intercepted the child at the Malaga carnival on Saturday evening.

The 47-year-old suspect had been seen among the other carnival goers wearing a shirt with FBI printed on it, and carrying ‘toy handcuffs’.

Partygoers saw him allegedly grab the boy and leave the scene, and managed to stop him with the mother’s help.

Fortunately, a relative of the mother had captured 20 seconds of footage of the attempted kidnap on her smartphone which provided the grounds to keep the suspected abductor behind bars.

The short video reportedly shows a man dressed in black lifting the child up off the ground as the mother dances in front of the person filming.

The suspect was around 60 feet away before the relatives realised the child had gone, but they managed to chase him and intercept the boy.

Although the man told police he had been assaulted, video evidence appeared to show the reverse was true.

The suspect was already known to police but had no previous crimes in connection with child kidnapping.