WHEN the Spanish mens’ Rugby Sevens went to Fiji for a training camp, the last thing they expected was to be caught up in a cyclone that would kill 28 people.

Devastation is reigning in Fiji after Cyclone Winston where winds reached 330 km/h on Saturday February 20, destroying power, communications and buildings.

More than 14,000 people have been evacuated from their homes and more than 1,000 homes have been destroyed, especially on the Island’s northern coast.

At the Uprising Resort hotel in Fiji, members of the Spanish rugby team leapt into action, fortifying the hotel’s boundaries with sandbags.

“They dropped everything, got out there and put their boots down and helped with the sandbagging,” said the resort’s General Manager, James Pridgeon. 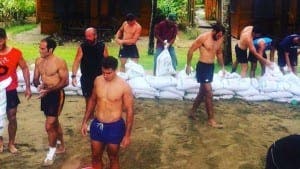 “Just constantly keeping the sandbags back up, they didn’t put their safety first, they kept us safe instead.”

All hotel rooms were evacuated and there were no casualties among hotel guests.

The team had been in Fiji for a four week training trip, hoping to qualify for the World Rugby Sevens Series in Hong Kong in April.

Kimberley Mannion - 1 Jul, 2022 @ 19:15
AUTHORITIES have dismantled the lucrative business of the Spanish dog vampire - a man who kept roughly 500 corpses of cats and dogs whose...